I would love to have two ways communications with Cubase, like when i am using my mouse to change tracks in Cubase, then the Stream deck will follow.

If the Generic Remote definitions in Cubase is configured correctly (Receive/Transmit) there is a two way communication.

I don't know if there are any limitations in Cubase regarding which parameters that are sent when a track change is made but I know a lot of information is sent.

In my setup, I know that at least Mute/Solo and Read+Write Automation follow the selected track and the state is updated on the Stream Deck when I change track. 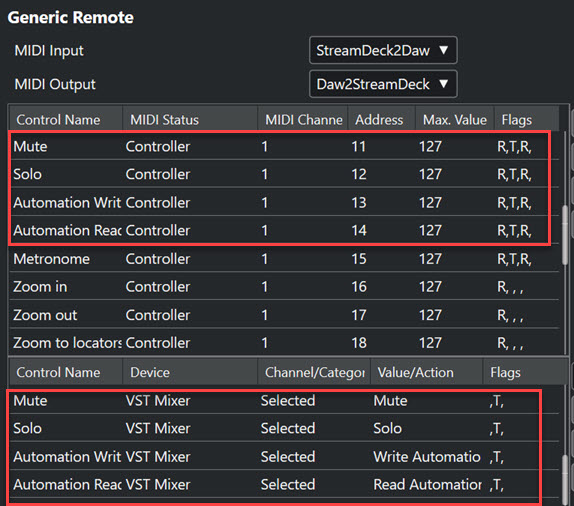 Hello. Yes, read/write for all tracks is working , but not for each tracks. And the same for mute and solo.

With the settings in the image in my previous post I get the following behavior, isn't this what you are asking for?

It's not possibel to make it work for selected track, only take away all muted tracks or all solo track.

I have Spitfire BBC Symphony Orchestra, so when i point my mouse and select my violin 1, I want my my Stream deck to change profile to my articulation for that instrument. I can make it happend from my stream deck, so it jumps to that selected track in cubase, but not the other way, if you understand

Regarding mute/solo we probably misunderstand each other since my video shows that it works for single selected tracks and for all tracks.

That being said, the situation you want is rather tricky even if I had the possibility to request a profile change. A track change message from Cubase doesn't exactly say which track that is activated other than the track number counted from the top in the arrange window. I can't determine if it's the "violin track", just that it's like "track 4", making it very project specific.

But Solo/mute And Write/read is not working as you say in my setup. Only for all tracks, and not for selected tracks. And i have the same set up in Generic remote as you.

Yes everything is the same as you, but it's not working as you say.
I use Cubase 11 Pro, maybe i should try it in Cubase 10.5 Pro, and se how it works there

You're right! How odd.

I tried to use the " Mixer" instead but then nothing gets muted, I don't know if this is a bug in Cubase...